Have you ever visited somewhere and felt that you took a bit of it away with you when you left?

Eight years ago, I visited Carisbrooke Castle on the Isle of Wight. And it captured my heart. The walls seemed to ooze history and stories – and I was sure I could detect the presence of those who had lived there many years before.

One resident in particular captured my imagination.  Lady Isabella de Fortibus was a great and powerful landowner. She organised ambitious improvements at Carisbrooke, not just designing her own spacious apartments, but adding a new kitchen and salting house, as well as a herb garden and vivarium (a place to keep fish alive once they were caught), to name but a few. What a woman! What creative and practical drive she must have had (and buckets of charisma to boot) to become so powerful in the male-dominated thirteenth century.  I reckon she was a truly formidable and determined character.

When I began drafting ideas for my third book, I contemplated making Isabella, and the legends which surround her, a significant part of the story. I even came up with ‘The Isabella Connection’ as a possible title!  But in the end, it was the place – the Isle of Wight – which became the primary inspiration. The blog heading above is taken from the end of chapter nine of Mouse. I loved Carisbrooke so much, it became the place where Laurel Smith first realises that the Isle of Wight is hiding some pretty intriguing secrets.

Me and Mouse in Lady Isabella’s apartment

I revisited Carisbrooke this year, and again I felt Isabella’s tough character radiating from the ancient bricks. On reflection, I think her spirit is everywhere in my books. (A resolute and courageous female. Sound familiar?!) So – to show my deep respect for this wonderful, feisty woman, I named the ‘Lady Isabella’ Pub in Mouse after her, and made it the setting for a critical scene where Laurel Smith plans a mission for Vectis, the mysterious Isle of Wight rebels.

If you’re finding yourself short of inspiration as the autumn gloom draws in, why not revisit a place that captivated you? Make a packed lunch and jump on a train … or just re-open your memory store!  Let that place, and the people who walked there, give you something new. You never know where you might end up.

In my last post I talked about how George Orwell’s Nineteen Eighty-Four got under my skin and shaped me as an adventure writer.  Now I ponder Orwell’s rules for good quality writing.

Earlier this year, I read Orwell’s essay, Politics and the English Language.

It appealed to me because a) it wasn’t very long (always a bonus!) and b) it turned out to be less about politics and more about writing. 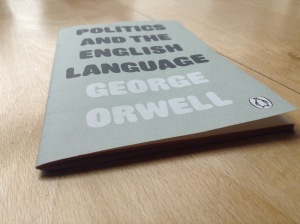 As I turned the pages, I found myself nodding in agreement with every point Orwell made.

He talks about the need for PRECISION (Yayy!  I spend AGES purging annoying flim-flam from my own writing) … DELETING PRETENTIOUS WORDS (Double yayy!)  … and REPLACING MEANINGLESS WORDS (I’m always saying to my students ‘ Don’t describe x as “amazing” … what does that actually mean?’)

And this is very good news for anyone who is worried that their writing isn’t ‘good enough’.

There’s no need to fear that your vocabulary isn’t impressive and flamboyant.  And no reason to stress because you can’t write anything ‘clever’.  Just follow Orwell’s six-point plan for writing and let your words speak for themselves:

BUT ALL RULES ARE FOR BREAKING, OF COURSE.   And Orwell’s final rule is almost my favourite (Rule 2 beats it by a squeak) …

6. Break any of these rules rather than say anything outright barbarous. 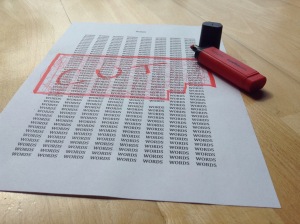 And that’s it!  Love words (especially the little ones) and use them wisely, but not barbarously! Leave the uncivilised stuff to those soundbite-loving politicians and sensation-seeking media companies.

So have that dustbin ready.

And learn to relish flinging away those pesky ‘clever’ words which get in the way of what you want to say.

If you want to hear more about how I came to love the little words in life, why not whizz over to the ‘ABOUT’ page and watch my video interview with Sue Aston.  Find out which authors inspired me to ‘keep it simple’ and use everyday language to write powerfully.

It was the year 1984: I was an ‘A’ level student preparing to go to music college, hoping to be a professional musician.

But I was harbouring a secret.

The truth was, I preferred English lessons to music lessons. I loved reading and analysing books, and I LOVED writing about it.

I was especially gripped by Nineteen Eighty-Four: George Orwell’s nightmare account of Britain Gone Wrong. I was fascinated by the way that he took something that troubled him, twisted it to the extreme and asked ‘What If …?’

Years later, this same thought process would become the starting point for my books. In Fierce Resistance, The JASMINE Portfolio and Mouse, I take a worrying trend and drag it to a dire conclusion – then throw a teenage girl into the mix and say, ‘Now deal with that.’

But the influences don’t stop there. I re-read Nineteen Eighty-Four this year – and was stunned to see how much this one book had stretched and pulled me into the writer I am today.

So I’ve written an article about it.

If you want to hear how 1984 turned out to be a HUGE number in my life … you can find out more HERE.  Or go to ‘News and Features’ on the menu bar and click on the drop-down menu.

Very proud to announce that my third book, Mouse, is now available on Amazon in both paperback and Kindle versions.  Here is the trailer video – and you can find out more about Mouse on the Books page – or have a peek in the Q and A section to find out how it all came about.

Fiona Beddow’s third book is on its way!

FIONA BEDDOW’S SECOND NOVEL, THE JASMINE PORTFOLIO, IS NOW AVAILABLE ON AMAZON, IN BOTH KINDLE AND PAPERBACK VERSIONS … 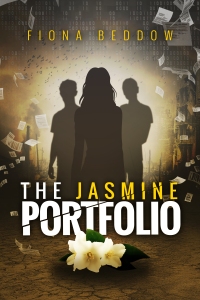 Here is the trailer video:

FIERCE RESISTANCE IS AVAILABLE IN PAPERBACK OR KINDLE E-BOOK ON AMAZON. YOU CAN ALSO DOWNLOAD AN APP FROM AMAZON WHICH LETS YOU READ BOOKS ON YOUR SMARTPHONE, TABLET OR PC.

Here is the trailer video ...

♦ BOOK THREE IS ON ITS WAY … A NEW HEROINE, A NEW JOURNEY!  THIS EXCITING NEW ADVENTURE WILL HAVE A ONE-WORD TITLE – AND THE FIRST PERSON TO GUESS CORRECTLY WILL RECEIVE A SIGNED COPY WHEN IT IS PUBLISHED. MESSAGE THIS SITE OR EMAIL info@fionabeddowbooks.com WITH YOUR GUESSES! ♦