In April 2014, Fiona Beddow Books, in association with the charity Khushi Feet, announced an exciting competition. The prize was a signed copy of Fierce Resistance, some Khushi Feet goodies, and the chance to become a character in Fiona Beddow’s third book!

All entrants had to do was answer a simple question:

What is the national animal of India? 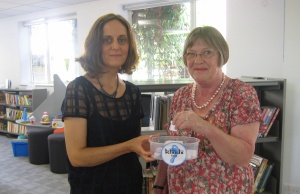 Councillor O’Reilly told Fiona that, many years ago, she worked with author Richard Adams, before he became a professional writer.  Richard asked Sheila if she would do a bit of proof-reading for him … and the manuscript in question was none other than Watership Down, which went on to become one of the best-selling children’s books of all time (and a very moving film, too)!  That is quite a connection!

If you would like to find out more about Khushi Feet’s work educating the street children of Kolkata, you can click here.

WATCH THIS SPACE FOR MORE COMPETITIONS IN THE FUTURE … !